NCT is a popular band group headed by boys which is essentially South Korean and is loved by people all around the world. It is being run under SM Entertainment. ‘NCT’ stands for Neo Culture Technology. Kpop groups have been ruling the world and NCT is one of the top twenty Kpop groups. It is one of the groups that has the largest number of members which includes twenty-three members on-board. The band was inaugurated on January 1, 2016. The NCT members names are: Taeyong, Taeil, Johnny, Yuta, Kun, Doyoung, Ten, Jaehyun, WinWin, Jungwoo, Lucas, Mark, Xiaojun, Hendery, Renjun, Jeno, Haechan, Jaemin, YangYang, Shotaro, Sungchan, Chenle, and Jisung who fall into the age group of late-teens and mid-twenties. If you’re reading this article, we are sure you are eager to know more about these young influencers, so let’s get going:

How many members are in NCT?

There are twenty-three members in NCT who participated in four different subdivisions. All of them lie in the age group of late-teens or mid-twenties. The world is already going wow over them. Let’s see who these boys are who have won the hearts of millions.

Let’s navigate to the next section:

In this section, you’ll be acquainted with the members beginning from the oldest to the youngest I.e., the NCT age order would be from oldest member to the youngest one. You can also find their height, weight, birthdays and zodiac signs. 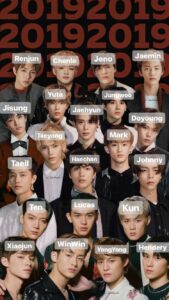 The nct profile is in the following section:

Moon Taeil, with his birthday falling on June 14, 1994, is twenty-six years old. His height is 171 cm. His weight is approximately around 60 kg. Furthermore, he belongs to cohort: Gemini.

Kim Doyoung’s was born on February 1, 1996 with his current age being 25 years old. He stands 178 cm tall and weighs approximately 60 kg. Just like Johnny, he is squad Aquarius.

Mark Lee stands 175 cm tall. He ages 21 years with his birthday falling on 2nd August 1999. He is of course a Leo as he is an August born. The weight of this young star is approximately 64 kg.

This young star’s age is 21 years old. His birthday comes on August 8, 1999. Xiaojun also belongs to the zodiac category to which Lee belongs: Leo. In terms of his body profile, he is around 59 kg and 170 cm.

Hendery reaches 170 cm in length. Being 21 years old, Hendery’s day of celebration is September 28, 1999. He is a Libra as he is September born. His weight comes to a total of 60 kgs approximately.

Oshaki Shotaro is an NCT new member of the NCT group. He became a part of it in 2020 only. His birthday comes on 25th November 2000 with his age being 20 years old. He stands 170 cm tall and weighs 59 kg. He belongs to the group: Sagittarius.

Jung Sungchan is also added recently to the team. He was added before Shotaro. Sungchan’s birthday comes on September 13, 2001 making him age just 19 years old. His body profile includes height which is 170 cm and weight which is 65 kg. He belongs to the star sign of Virgo.

Jisung, a boy who is just 19 years old, is an Aquarius in this boy band group. His birthday comes on 5th February 2002. His height and weight are 180 cm and 50 kg respectively.

Who is the Most Popular Member of NCT Band?

Mark Lee, who is Rapper, Dancer, Vocalist in NCT Band is the most popular member of NCT Band.

Who is NCT maknae?

Jisung, who is just 20 year old is he NCT Maknae.

How many members in NCT Kpop Group?

There are Total 23 (tweety three) members in NCT Kpop Band.

We have included almost everything that falls in the NCT Kpop profile. All NCT members possess extraordinary talent and appeal. We’re sure that either you are already their fan or you’re going to become one after you get acquainted with them.