Mamamoo is a popular South Korean girl group formed in 2014 by the entertainment company – Rainbow Bridge World. The band has four Kpop queens who are known for their intrepid and candid character. Their straight talks and unfiltered statements, make them different from other Kpop groups.

The band name is cute and catchy but it holds a deep meaning within. Mamamoo resembles the sound made by small babies. Here “mama” signifies the word mother. Likewise, the group also takes their fandom as someone very close to their heart. They wish to develop an organic and instinctive bond with the audience through their music.

Fun Fact, Mamamoo’s fandom is called Moomoo, and their lightstick has a radish shape. In the Korean language, moo is the word used for radish. Want to explore more such facts about the group and the members?

Read ahead as we’ve got everything covered!

The four members of Mamamoo are Solar, Moonbyul, Wheein, and Hwasa. Here’s a complete profile of each member of Mamamoo. 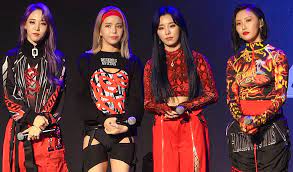 Solar was born on February 21, 1991, in a South Korean city, Seoul. Her birth name is Kim Yong Sun and currently, she is 31 years old. She is the second tallest in the group after Moonbyul with a height of 162 cm (5’4”). Speaking of her weight, she is approximately 45 kg (99 lbs). Solar is the official leader and proclaimed “Mom” of the group. Before becoming an Idol, she aspired to be either a flight attendant or a tour guide for foreigners in Korea. She’s friends with Red Velvet’s Irene and Chorong of Apink. Mamamoo’s Japanese website and a few other sites refer to Solar as the main vocalist of the group, but Solar prefers not to be called so. Solar was the one who created Moomoos official fan song and she’s also the only member in the group having no tattoos.

Moonbyul is the rapper of Mamamoo. She auditioned to be a vocalist instead, but later changed her position as a rapper. Her full name is Moon Byul-Yi and she was on December 22, 1992, in Bucheon, South Korea. Her current age is 29 years and she has 2 younger sisters in her family. She is the tallest member of the group with a height of 165 cm (5’5”). She weighs around 45 kg (99 lbs). Moonbyul is teased by the nickname, “Black Hole” because she sweats a lot. She appeared in a TV show called “Idol Drama Operation Team” with 6 other female idols. Moonbyul has been credited for over 98 songs which makes her one of the most credited female idols of her generation.

The full name of Wheein is Jung Whee In and she was on April 17, 1995, in Jeonju, South Korea. As of now, she is 27 years old and she is the only child of her parents. Wheein and Hwasa know each other since childhood. Coincidently, they also share the same height. Wheein is 162 cm (5’4”) tall and her weight count is 42 Kg (92 lbs). Wheein is such a foodie that she’s often caught watching mukbang shows. She refers to herself as a snack queen. Hwasa and Wheein went to the same middle school. Therefore, among her 12 tattoos, 2 of them are her friendship tattoos with Hwasa. Wheein also has a huge crush on Beenzino and he’s the ideal type for her.

Hwasa is the bold Maknae of Mamamoo. Her birth name is Ahn Hye Jin and she was born on July 23, 1995. Hwasa is currently 26 years old and her nationality is South Korean. Her height is the same as Wheein, i.e. 162 cm (5’4”) and she weighs around 44 kg (97 lbs). Hwasa used to record guide vocals for 4Minute in her early career. Not many people know this, but Hwasa’s first love interest was her Social Studies teacher. She even was in contact with him during the era of Mamamoo’s “You’re the best” album. She loves cooking and listening to Jazz music. One of her favorite singers is Rihanna. She shares a close bond with Wheein. Among her 5 tattoos, two are her and Wheein’s friendship tattoos.

What happened in the Mamamoo Blackface controversy?

The girl group Mamamoo faced a huge backlash from her fans and the global audience because of the blackface controversy. The controversy was triggered during their concert in Seoul on March 3, 2022. A parody clip of the four members of the band aired at the concert in which they performed Mark Ronson and Bruno Mars’ “Uptown Funk”. In the clip, the quartet appeared wearing black paint on their faces to imitate the look of the dark-skinned celebrities. This made the audience disappointed and angry with the act of Mamamoo’s members. Later, the group realized their mistake and Hwasa released a post on their Facebook page apologizing for the same.

Mamamoo has risen as a Kpop group in Korea that doesn’t follow the pre-set norms of the society. They set trends for the upcoming music generation through their style, performance, and outspoken character. With fame, comes controversies and trolls. Though, they care least about the haters and try to do the best for their fans. You can love them, you can hate them, but you cannot ignore them. All the Moomoo’s out there, keep supporting the queens of Kpop!