EXO is a famous boyband in South Korea. The group debuted with their mini-album Mama on April 12, 2012, a year before BTS‘s debut. SM Entertainment initially launched the group as a twelve-membered unit, but later a few members left the team. Presently, there are 8 active members in the group.

EXO stands for EXOPLANET, which refers to the planet out of our Solar System. It signifies that the group’s music is “out of this world” and they want their stardom to be Universal.

Here’s a complete profile of all the present members of EXO. We have also provided brief info about the former members of the group. You’ll get to know EXO members’ height, EXO age order, EXO members’ birthdays, and a lot more! 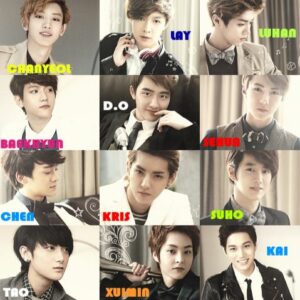 Xiumin’s birth name is Kim Min Seok. He looks pretty younger than his actual age. Xiumin was born on March 26, 1990, thus, his age is 32 years. He is 172 cm (5’8”) tall and his weight is 57 kg (125 lbs). He is specialized in taekwondo, fencing, kendo, and soccer. Xiumin acted in several dramas and movies and later enlisted in the army for about 1.5 years. His mates describe him as someone cute yet manly.

Chen is also the main Vocalist of the band. He was born on September 21, 1992, in Siheung, Gyeonggi Province. He joined SM Entertainment as a trainee in 2011 and now, EXO Chen age is 29 years. Chen is 172 cm (5’8”) tall and his weight count is 60 kg (132 lbs). Chen is best at singing high notes and he is also specialized in playing the Piano. He is one of the playful members of the group as he jokes around and pranks others a lot.

Chanyeol’s full name is Park Chan Yeol and he is the main Rapper of the group. He was born on November 27, 1992, in Seoul, South Korea. Therefore, his current age is 29 years. He is one of the tallest members in the group with a height of 186 cm (6’1”). He weighs around 70 kg (154 lbs). Chanyeol is romantic, cheerful, and bright. He calls himself “Reversal Voice” because he has a baby face but a deep and manly voice.

Kai is the main dancer of the group. His birth name is Kim Jong In and he was born on January 14, 1994, in Suncheon, South Korea. EXO Kai age is 28 years and he became an SM trainee when he was just 13 years old. He has the shortest temper among all the other members of the band. Although, he’s quite shy and doesn’t express his feelings a lot. His height is 180 cm (5’11”) and his weight is 67 kg (148 lbs). He has dated Krystal of f(x) and Jennie from Black Pink.

Sehun’s full name is Oh Se Hun and he is the lead dancer, rapper, and visual of EXO. He was born on April 12, 1994, and thus, his current age is 28 years. He is 183 cm (6’0”) tall and he weighs around 66 kg (145 lbs). Sehun is pretty close to Suho and he has known him for the past 15 years. He has a shy personality and he’s not good at pronouncing the letter S. Sehun is a regular cast member of the variety show “Busted” and he has also appeared in a number of Korean dramas.

These are former members of EXO –

What is full form of EXO?

Who is Most Popular Member of EXO?

Kai, who is Lead Rapper and Main Dancer of EXO, is the most popular member of EXO.

Who is Maknae of the EXO?

Sehun is the youngest member of the Exo Group.

EXO debuted one year before BTS and is a globally acclaimed band with currently eight active members. The group and its members have gained worldwide recognition because of their music and powerful performances. We hope that EXO members will keep raising the expectation bars of their fandom EXO-L with their heart-throbbing songs and charm.