Delhi Mumbai Expressway is a dream project of the Indian Government. Its foundation was laid in March 2019 and is scheduled for inauguration on January 26, 2023 (Expected). It is mainly intended to connect the two biggest hubs of the country, i.e. New Delhi, the National capital, and Mumbai, the Economic capital. This eight-lane global longest expressway can expand up to twelve lanes as per traffic volume. The Delhi-Mumbai Expressway, a controlled-access highway of 1,380 kilometres, was proposed to reduce the distance between two major hubs by having travel time from 24 hours to 12 hours. 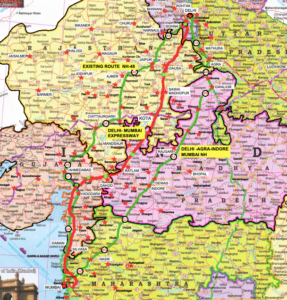 The construction cost of the Delhi-Mumbai Expressway is Rs. One lakh crore with land cost. It is executed as per the Bharatmala Pariyojna Phase-1 plan. Out of 1380 km, 1200 km is awarded as per the contract, the Government officials say. The Government will implement the project in fifty-two construction packages. A Special Purpose Vehicle (SPV) is formed by the National Highway authority to finance the construction & operation of the Delhi Mumbai Expressway route. It will be in the name of DME Development Limited. NHAI’s recent statement says that AAA ratings are given to DMEDL by CRISIL, Indian, and CARE ratings.

80 lakh tons of cement will be expected to use for the mega-budget project. The Delhi Mumbai Expressway route map will create lakhs of employment opportunities for skilled technicians and ground labourers.

Unique features of the Delhi to Mumbai Expressway

E-Highway: Government is planning to stretch Delhi to Mumbai Expressway as an e-highway. In this way, trucks, and buses can run at a speed of 120 km/hour to eliminate vehicular pollution. The minimal speed and congestion-free expressway will lower the logistics expenses by up to 70%, as heavy vehicles will use electricity instead of diesel. It will also have 4 dedicated lanes for all-electric vehicles throughout the entire route of eight lanes. Besides, a high barrier of 1.5-metre will be built on both sides of the expressway road for security purposes, and inside slip lanes, the toll plaza will be set up.

Wildlife Crossings: The 8-lane expressway will be around Ranthambore National Park, Sariska Tiger Reserve, and Mukundara National Park, on stretches of 2.5 km. Mukundara National park and Matheran eco-sensitive zone are India’s first eight-lane broad tunnels. This longest expressway will include the country’s first animal over bridges that are mainly designed to maintain the wildlife section unaffected from project construction.

Roadside services: In this expressway, one can find out facilities such as single-brand food stores Mc Donald’s, Burger King, Subway, food courts, hotels, fuel stations, ATMs, retail shops and charging stations for electric vehicles. It is the first expressway with helipads and well-equipped trauma centers every 100 kilometres for any medical emergencies.

Eco-Friendly aspects: It is an environment-friendly route. This expressway will cover around 20 lakh trees and they will be watered by the drip irrigation method. It is expected to cut about 850 million tons of carbon dioxide emissions thru tree plantations. Using a combination of solar energy and state grids will help operate roadside lights on the expressway.

Latest information about the project

90% of the construction of the stretch between Alipur to Dausa has been completed. Once the stretch is inaugurated, the travel time will be reduced from 4 hours to 2.5 hours. This 8-lane expressway will surely help to reduce congestion and traffic on the road. Optic fibre cable networks are enabled in the Delhi Mumbai expressway, which is a part of India’s National Broadband Mission. Optic fibre cable networks have the potency of advancing telecommunication connectivity. The Delhi Mumbai Expressway map is divided into 4 segments, each of which passes through a different state.

When Will Delhi Mumbai Expressway open?

The Delhi Mumbai Expressway is expected to Open by End of 2024. The Government of India has put a deadline of 26th January 2023 (which is unlikely to meet). The Work is going Fast for sure.

As discussed above, this dedicated e-lane is expandable up to 12 lanes. It will cover many main cities and be the first e-way with 5-animal bridges. This mega-budget expressway is expected to be completed by December 2023.