Aespa (에스파), also depicted as æspa, is a four-member squad of girls from South Korea. It is a multinational group of four influencers being run under SM entertainment. The four Aespa members are Karina, Giselle, Winter and NingNing. Karina and Winter are based out of Korea whereas Giselle and Ningning are from Japan and China respectively. The group first appeared in public with their debut single – Black Mamba on 17th November 2020. The æ of æspa represents ‘Avatar X Experience’ and the term ‘Aspect’ connoting “discovering a new self with the help of an Avatar and experiencing a new world”.

The group launched its first digital single, “Black Mamba” on November 17, 2020, under the platform of SM Entertainment. “Black Mamba” is the first composition that showcases the world-view behind æspa. The music video of Black Mamba received the highest number of views in 24 hours as a K-pop debut. It is one of the most famous K-pop releases to date.

How many members are in aespa? 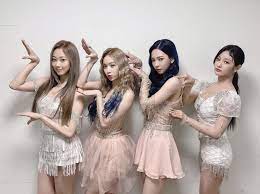 Let’s go through the Aespa Profile:

Karina is a singer and rapper from South Korea working under SM.

Entertainment. She is the oldest of all with her age being just 22 years and is the leader of the Aespa group. She is also a member of GOT the beat which is another SM Entertainment-run female group. Karina is the main dancer, lead rapper and the centre of Aespa. She is also the tallest of all being 5’6” (168 cm) in height. Before the release of Black Mamba, Karina was one of the popular Ulzzangs I.e., one of the best and most good-looking faces in Korea. She was under training for about four years.

She first appeared in Taemin’s music video, “Want” and was also a backup dancer during the song’s promotions. In 2020, she debuted with Aespa as one of the four members of the girl squad. Recently, she debuted with GOT the beat in January 2022.

Giselle is a Korean cum Japanese singer and rapper being starred under SM Entertainment. She was announced as the Aespa’s fourth and final member. Giselle is the squad’s main rapper. She was born in Uchinaga Aeri. Giselle is half Japanese and half Korean. She is well-versed in English, Korean and Japanese. Before she started working with SM Entertainment, she was in AJS which is a training academy for idols. She worked as a trainee for just 10 months, which makes her the first idol of SM who underwent the shortest training period. She is also credited for writing “Zoo” from the album 2021 Winter SMTOWN: SMCU Express.

Kim Min-jeong, with her stage name Winter, is one of the four girl members of the group Aespa being run by SM International. She is also a member of the female unit GOT the beat. She is the official visual of the group. In her group, she is the lead vocalist. She underwent three years of training before her debut single aired. Prior to the release of the single, SM entertainment introduced her as the first member of Aespa on 26th October 2020. Later in November, her avatar I.e., æ-WINTER was disclosed in the video SYNK WINTER on the 4th of November. Fans say that she resembles Taeyeon from SNSD.

Ningning, the Aespa Maknae, is the youngest member of the group. Her Aespa position is the main vocalist. She was born in China. Ningning joined SM Rookies in 2016 after moving to Korea. She is the only member of the group who has been an SM Rookies trainee. Before debuting as one of the four members of Aespa, she was a participant in a Chinese competition: Let’s Sing Kids. She also participated in many singing shows; one of them being China’s got talent and various others. She was selected as one of the members of Aespa by the SM Entertainment staff after getting acquainted with one of her videos.

Who is the Most Popular Member of Aespa Kpop Band?

Karina, who is the Leader, Main Dancer, Lead Rapper is the most popular member of Aespa Band.

Who is Aespa maknae?

Ningning, who is just 19 year old is he Aespa Maknae.

How many members in Aespa Kpop Group?

There are Total 4 (four) members in Aespa Kpop Band.

The four stars of Aespa: Karina, Giselle, Winter and Ningning have been ruling the world since their debut release of Black Mamba on November 17, 2020. The stars have worked hard to make their music video a hit and they are being showered with love from all over the world as their single has broken several records and remained in the top few for a while. To go over the Aespa Kpop profile, go through the article and get to know the details of each celeb.